We truly hope you enjoy your visit to the Credit Union 1 Arena. In order for you to plan your visit, we have put together the following list of frequently asked questions.

What are your accommodations for people in wheelchairs?

Page provided in this link: To ADA Accessibility Page

Is there a lost and found?

Credit Union 1 Arena has a “no re–entry” policy during events. Guests who wish to return a prohibited item to their vehicle or need to exit and re–enter due to personal emergencies, must first make contact with a Guest Services supervisor or manager to make necessary arrangements.

I’m a nursing mother. Is there somewhere I can do this in privacy?

A nursing mother’s room will be provided upon request. Proceed to the Administration Offices near Gate 4.

Is there a dress code?

All guests in attendance are required to wear a shirt and shoes at all times for their own safety. Credit Union 1 Arena management reserves the right to deny entry to guests wearing clothing items displaying offensive text and / or images.

Do I need to buy a ticket for my child?

For most sporting events, including Flames games and most concerts, children under the age of 2 will be admitted into Credit Union 1 Arena without a ticket if they sit on an adult’s lap and do not occupy a seat. Any child 2 years of age or older will require a ticket to enter the arena. Please note that some shows (especially those intended for children) will have a different age policy. If you are uncertain about the policy, feel free to contact us

Can I bring in a stroller?

Strollers are not permitted in the Credit Union 1 Arena. We cannot check these items, so please leave them in your car.

Can I bring in my service animal?

Animals or pets of any kind are prohibited with the exception of service animals for guests with disabilities and/or special needs. Services animals are welcomed into the building and must remain on a leash or harness at all times.

Is there an ATM in the arena?

Can I bring in my backpack?

All large bags, i.e. backpacks, suitcases, beach bags, large purses, etc. will be prohibited from entry into the arena. Purses and other small bags will be permitted after being searched. Bags and purses larger than 14″ x 14″ x 6″ will NOT be permitted inside the venue. Policy is subject to change based on event policy.

When do doors open for an event?

The time the doors to the Credit Union 1 Arena lobby open will vary according to the event. Typically, doors will open 90 minutes prior to the event time noted on your ticket (all door times are subject to change). Patrons will be able to access the box office / will call prior to doors opening.

The main entrance into Credit Union 1 Arena is located at the intersection of Harrison Street and Racine Avenue. Other entrances may be available depending on the event.

Does the arena provide listening devices?

Credit Union 1 Arena is equipped with an assisted listening device system. Receivers are available for most events and are provided free of charge with a valid form of identification from Guest Services located on the main concourse level outside Section 104.

Where can I park?

How do I get to the arena?

Does the arena sell food?

Where can I smoke during an event?

Can I bring binoculars?

Guests are welcome to bring their personal binoculars for most events at Credit Union 1 Arena.

Tickets On Sale Thursday, May 6

Adding to an already incredible year, Glass Animals have announced their North American “Dreamland Tour.” The run kicks off this August and takes the band across North America well into 2022. The shows add to their already sold-out UK tour dates, previously announced Red Rocks shows and confirmed festival performances at Bonnaroo, Life Is Beautiful, and Outside Lands. The band comes to Chicago on Friday, March 18, 2022 for a concert at the Credit Union 1 Arena (formerly known at the UIC Pavilion). Show time is 8:00 pm.

Earlier this month, Glass Animals performed “Heat Waves” on The Tonight Show Starring Jimmy Fallon, where the band took over Margate’s Dreamland Theme Park and brought it back to life with an electrifying performance—watch HERE. In addition, they performed on The Ellen Degeneres Show where they took over a skate rink and used fan submitted footage to fill the television screens behind their performance—watch HERE.

“Heat Waves” is taken from Glass Animals’ critically acclaimed third album Dreamland released last summer and this week was certified Platinum in the US. Neary a year since its release, the song continues to grow globally across streaming platforms and on radio charts. Amassing over 450 million global streams to date, “Heat Waves” peaked at #1 on the Alternative Radio Chart for 3 consecutive weeks, a first for Glass Animals in their career. The track currently sits in the Top 20 on the Top 40 Radio Chart and is making similar moves at Hot AC and AAA. “Heat Waves” held the #1 spot on the ARIA Official Singles Chart in Australia for six consecutive weeks, marking the band’s first #1 single globally and in their release history. Last week, it hit a new peak on Spotify’s Global Top 50 Chart at #25. With over 2.5 million global adjusted single sales, the song has amassed 2 million daily streams and received 16 million views of the video on YouTube. Glass Animals recently hit a new Spotify monthly listener peak of 17.2 million, surpassing the likes of Tame Impala, Gorillaz, The 1975 and The Strokes.

Since its initial release last June, “Heat Waves” has experienced a global rise in support. Having originally resonated with Glass Animals fans, word quickly spread, and the track started getting healthy traction at radio globally. Next came a sync placement on FIFA, which opened up a whole new audience and helped the track begin to climb charts all over the world. “Heat Waves” most notably was then crowned number 1 on Triple J’s Hottest 100 – an accolade not given to a UK band since 2009 with previous winners including Kendrick Lamar and Billie Eilish. A third surge in attention came more recently with an organic Minecraft affiliation, whereby the YouTuber LoverFella (2.3M subscribers) rebuilt a Glass Animals fan’s base and surprised her with a meet and greet with the band who were waiting inside. Watch it HERE and the Extended BTS HERE. Dave Bayley recently sat down to chat about the track’s creation with Hrishikesh Hirway on the coveted Song Exploder Podcast. Listen to the interview HERE.

Glass Animals’ album Dreamland entered UK charts on its opening week at #2 (their highest ever scoring chart position, a massive 21 spots above their last album, Mercury Prize nominated How To Be A Human Being) and charted inside the top 10 in the US, Australia, New Zealand and Ireland. The album clocked up 160 million streams in its first week of release.

Reserved tickets ($ prices) can be purchased at The Chicago Theatre box office, online at www.Ticketmaster.com or by phone at 800-745-3000. 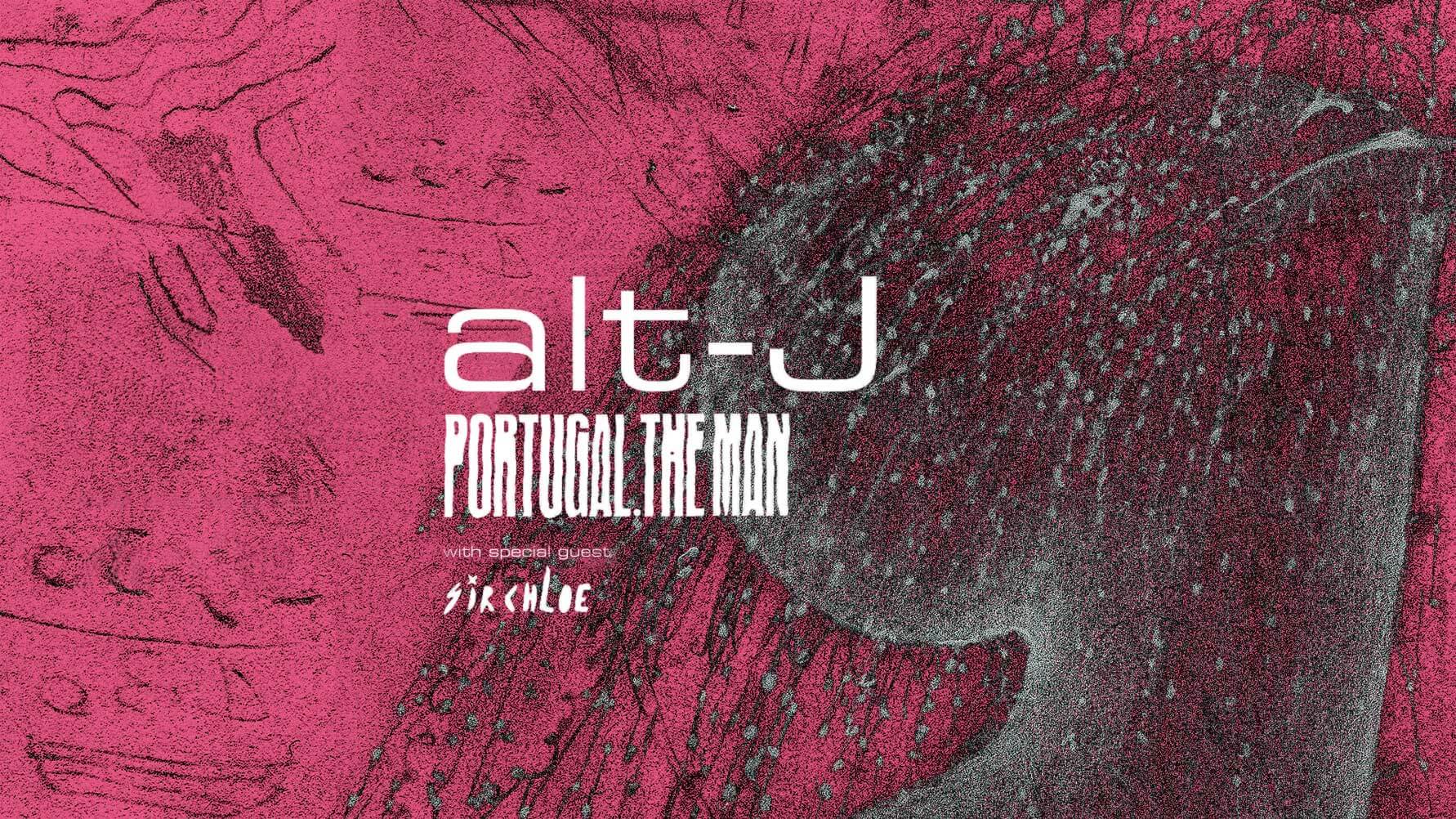 JUST ANNOUNCED! alt-J and Portugal. The Man on tour in North America in 2022! Coming to the Credit Union 1 Arena on Saturday, March 19th, 2022 with special guest Sir Chloe. Sign up for early access to pre-sale tickets at altjandptm.com. Tickets go on sale Friday 10/1 at 10am.

The Illinois Governor Mandatory Mask Mandate for all state run institutions is in effect for this event. Masks are required for all patrons. Refusal to comply may result in removal from event.